My experiences of bullying was both verbal and physical.

It happened consistently in elementary and middle school. Fortunately, it didn’t really happen all that much during high school.

I usually describe myself as a “different” kind of kid growing up. It was the only way I could really explain why I was such a target for bullies. I look back now after sharing my story with my wife, family and friends, that it wasn’t so much that I was “different,” but that I was genuinely being more of myself than majority of my classmates.

They were the ones with the problem. Not me. And it took a long time to grasp hold of that reality.

I wasn’t into sports. I loved writing and drawing. I loved reading. I was into cartoons and comics. I loved keeping up with current events. I was really into science, technology and sci-fi. I even had a bit of an obsession with Nuclear Power and Nuclear Energy.  I was a regular boy … but my classmates thought I was weird, a freak of nature, different.

I can vividly remember my time at S.S. Conner Elementary. Whenever I said my name, some of the boys and girls in my class would mock me … repeating my name and what I would say and how they thought I sounded. I wore glasses, sometimes had a nasally speech, and would often be called “Steve Urkel,” the kid that was on ABC’s Family Matters.

When it came to classroom seating or classroom projects, the kids would act repulsed and disgusted to be around me.

Sometimes, the fights got physical. Whether it was on the playground or on the way home, I would sometimes be followed around by a group of boys who would try to fight me and often hit me, laughing at me, mocking me.

During that time, I would tell my parents and they would talk to the teachers and the principal.

The solution for my bullying problem was often: “just ignore them!” And to make matters worse, sometimes the teachers or other adults around just wouldn’t care to do anything about it.

It felt like people who were in authority failed me.

Once, I was told by one of my parents, “if you let yourself get beaten up, you’re getting a spanking.”

That threat only made matters worse.

Middle school was the worst time for me. When I was going to Gaston Middle School I would take the school bus. The bus was usually very full and on really hot days, incredibly humid and uncomfortable. Kids would purposely try and keep me from sitting down, sometimes tripping me as I walked down the aisle.

If I sat in the front or near the middle, I was safe most of the time. I had very, very few friends and the ones I did have we mostly hung out at the bus stop for survival, hoping we wouldn’t be talked too or talked about.

I would hope and pray every single day that the kids on the bus, especially the ones in the middle section and the back of the bus, wouldn’t speak to me or get eye contact with me. When they did, they would talk about my looks and belittle me in any and every way to make me feel embarrassed and humiliated.

I remember the soul-stinging remarks of one kid who stared straight at me and said in front of everyone, “if he and I were related, he would kill himself.”

Some would ask me, “why do you act white!?” and “why do you talk white.” Others got personal, even sexual with their comments, but I would never answer or make conversations apart from telling them to “shut up” or “leave me alone.”

Many of those days and nights ended with me angry, sad, frustrated, crying and embarrassed and disappointed over the fact that I couldn’t do more about my bullying situation.

Most of my survival of those bullying experiences involved me going to the counselors office where sometimes I would sit, hang out and talk out some of my thoughts and frustrations. Some teachers and other officials took a liking to me, even though my classmates would not.

At the writing of this article, I’ve worked out a lot of issues in my life that came from bullying, from abuse and from the anxiety that weighed me down and the thoughts I had about the adults in my life then and now.

Growing up in the church and maintaining a real and whole relationship with God and being a follower of Jesus Christ, my mind and heart has been changing in the following ways:

As an adult, I look back and I look at present day issues on bullying, knowing that it is not an easy thing to overcome.

A lot has changed in the way we deal with bullying now, especially when we’ve seen the affects it has on children, teens and adults.

I commit to talking more and more about bullying … more than I used too!

To every kid, to every adult who feels like they can’t go on and that the bullying has gotten out of hand, I want you to know that you are not alone.

And, for those are needing to be walked with on the journey of survival and overcoming bullying, I am more than happy to use the power of the pen and the keyboard to walk with you.

A Conversation With 13-Year-Old Me 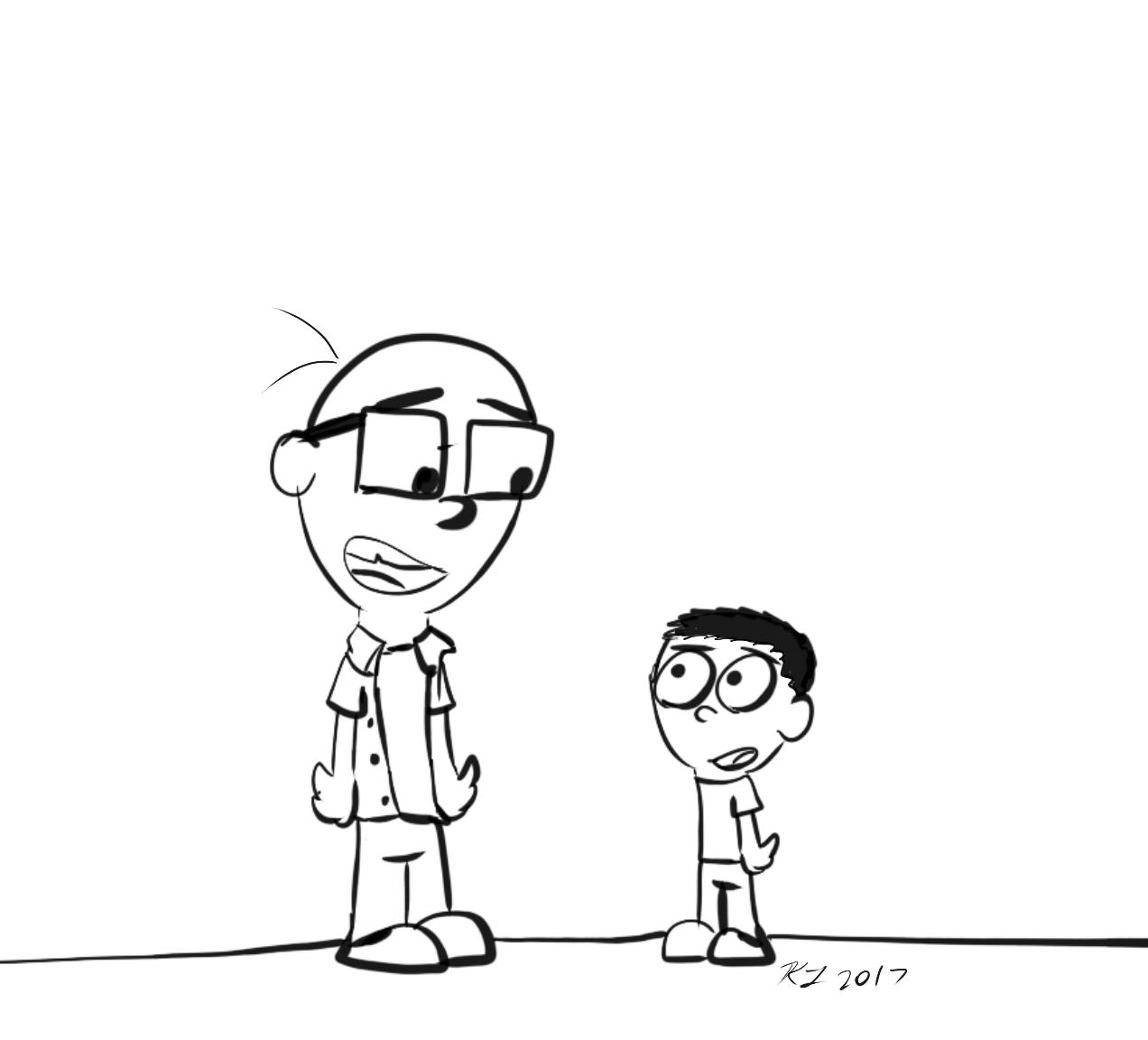 So, for fun, I thought it would be kind of neat to write a short-story of me interacting with my 13-year-old self. Needless to say, I didn’t have too much trouble putting it together.

Ken 13:  You DO have bad memory then. I’m  itchy…smelly…and constantly feel awkward.

Ken 13:  I preach!? And I actually create cartoons and stuff!?

Ken 32:  A cartoonist…yes. And a writer… And you’re gonna do other media stuff. Oh, and you’ll get married in your early 30’s to an amazing women.

Ken 32:  Jesus…a whole, whole, whole lot of Jesus. And you were faithful. You worked hard. You grew up. You matured. You changed. And you didn’t give up. You kept going.

(a pause between both)

Ken 32:  Yep. But, don’t worry, you’ll get past that stuff too. Get prepared to see a counselor or two.

3 Reasons Why I Still Write In A Journal

It was at age 13 that I received my first journal as a gift from my Mother.

I wasn’t sure what I would actually write about or if I would even bother journaling in the first place. But, the minute I put a pen to that paper, I was hooked. I was able to release a TON of thoughts and concerns and anxieties that I had as I sojourned through what was essentially an awkwardly yet successfully survived and blessed boyhood.

Even though I do love the digital touch of blogging, for me, theirs something about writing in a journal that really capstones my experience as a writer.

I needed this growing up. As a kid, I would often visit the school counselor like I was a modern day Charlie Brown. But, journaling did something similar for me. I really found myself being able to release junk that was floating in my mind and on my heart onto paper. I’m not going to lie, it felt weird sometimes being THAT honest with myself. But, I knew that I could be. I had the space, the privacy and the resources to be able to just be real on paper. It also helped that the journal I had at age 13 had a lock on it that was so efficient that the NSA couldn’t get to it.

As a Christian, as a man and as someone whose totally imperfect and who has the potential for failure at any given time, it is imperative for me to keep a journal of my thoughts, feelings, ideas and everything that pours out from my mind and heart. I journal because it keeps me focused on always  living and operating better as well as reminding me to remain humble. I have wrote about things in my journal that to this day still make me blush and scratch my head. Because of this, when I revisit my old journals, I am quickly reminded of how far the Lord brought me and, frankly, reminded of how blessed I am and how I am not deserving of how good I have it. Because I check back on those old journals, I can celebrate my successes and be reminded of my mission.

I come up with multiple ideas during the day about multiple things. I wonder sometimes if I’m ADD I come up with so much stuff. But, journaling and writing keeps things focused. Oddly enough, I wasn’t journaling or blogging as much and because of that I was suffering. My Pastor called me out on it (thanks uncle). As he’s always told me, “if you fail to plan, you plan to fail.” So, I got back into journaling in my book and writing down my journey and planning forward and I started seeing things materialize before me. This is SO key for me.

I bet that if you give a significant other or even your kids, grandkids or nieces or nephews or cousins a journal, I bet you they will come up with all kinds of things to write about or even draw.